After putting yesterday’s post to bed, I realized that there were some more things I wanted to say about COVID and the end of neoliberalism.

Recall that John McDonough had mentioned that the Orangutan’s war on trade and other economic policies, signaled the aging of the Neoliberal era. Well, over night, the baboon struck again when he asked the Supreme Court to overturn the ACA (Obamacare), which if it happens, will mean 20 million Americans will lose their health care during a global pandemic.

Their rationale — because it is unlawful. Really? From the most corrupt and unlawful Administration in US history. Could you try any harder to kill more Americans when the number of deaths has already passed 120,000?

In an Opinion piece in Wednesday’s New York Times, Charles Blow asked, “Can We Call Trump a Killer?” According to Blow, things are so bad, that the European Union is considering banning US citizens, and it is abysmal had Trump not intentionally neglected to protect American citizens.

In fact, several times since the pandemic began, he was quoted as saying the following about Corona, “Looks like by April, you know, in theory, when it gets a little warmer, it miraculously goes away.”

Early on in the crisis, some have suggested that perhaps it is time to consider single payer health care. In fact, some have argued that single payer systems have coped with Corona better than for-profit systems.

Shortages of Personal Protection Equipment (PPE), ventilators, and the lack of enough ICU beds is proof that for-profit health systems cannot effectively handle a global pandemic. “Having a healthcare system that’s a public strategic asset rather than a business run for profit allows for a degree of coordination and optimal use of resources,” according to David Fisman, epidemiologist at the University of Toronto.

One country that has been able to deal effectively with Corona has been South Korea, and despite recent setbacks, the following data and chart from a tweet by @hancocktom, highlights what Korea did right. 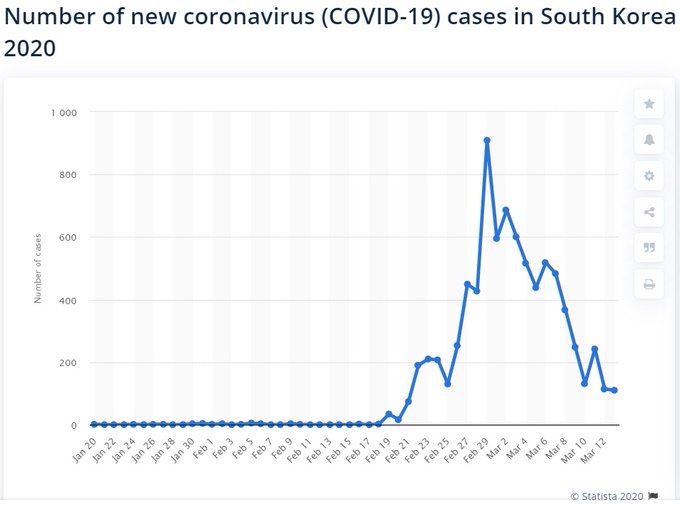 “Unhampered government intervention into the healthcare sector is an advantage when the virus is spreading fast across the country,” said Choi Jae-wook, professor of preventive medicine at Korea University in Seoul.

Denmark also has a single payer system, and like South Korea, offered drive-thru testing. Jorgen Kurtzhals, the head of the University of Copenhagen medical school, told the Washington Post that the strength of Denmark’s single-payer system is that it has “a lot of really highly educated and well-trained staff, and given some quite un-detailed instructions, they can actually develop plans for an extremely rapid response.”

“We don’t have to worry too much about whether this response or that response demands specific payments here and there,” said Kurtzhals… “We are aware that there will be huge expenditure within the system. But we’re not too concerned about it because we have a direct line of communication from the national government to the regional government to the hospital directors.”

One nation that has a single payer system and has had a bad experience with COVID is Italy. Presumptive Democratic nominee, Joe Biden, in a primary debate with Sen. Bernie Sanders in March, said that, “With all due respect for Medicare for All, you have a single-payer system in Italy,” said Biden. “It doesn’t work there.”

Another critic said the following:

There is no panacea for dealing with such a deadly and fast moving virus. Within a few short months it spread from China to Western Europe, the US (first cases found in a Washington State nursing home), and then globally.

Instead of going piecemeal to find a solution, all nations should have pooled their resources and worked to find a vaccine as soon as possible. Estimate recently said the world will hit 2,000,000 cases in the near future.

Single payer won’t cure it, but will make it easier to manage so that all infected will have the use of ventilators and ICU beds if needed, and medical personnel won’t have to reuse PPE that should have been discarded after treating one patient.

One more reason, now that COVID is causing so much unemployment, that we desparately need Medicare for All, with no qualifications other than US citizenship. We can give corporations and wealthy people billions in tax breaks, but not one red cent for people’s health care in a nationwide, single payer system that would have responded rationally and logistically to a pandemic, instead of as a “chaotic disaster.”

The coronavirus pandemic has led to record numbers of American workers being laid off or seeing their hours and paychecks dwindle. The economy is on the brink of a deep recession, and waves of coronavirus infections may continue for the foreseeable future. Medicaid will be a crucial piece of the puzzle that helps to ensure access to health care while protecting people from further financial ruin. Yet, one of Medicaid’s key provisions has been weakened by recently approved section 1115 “demonstration projects”, commonly referred to as waivers, that eliminate or reduce retroactive coverage. These waivers will diminish coverage for thousands of people seeking testing and treatment for COVID-19 and other medical care.

Retroactive eligibility is a long-standing feature of Medicaid that covers health care expenses for three months prior to the application date, provided that the beneficiary would have been eligible during that period. Before the Affordable Care Act (ACA), a handful of states imposed narrow restrictions on retroactive eligibility, but these limitations were paired with expansions of eligibility and had exemptions for vulnerable groups. Recently, however, many states—including Arizona, Arkansas, Florida, Indiana, Iowa, Kentucky, and New Hampshire—have gained Department of Health and Human Services (HHS) approval for 1115 waivers that drastically limit or completely eliminate retroactive eligibility, though four have been stayed by courts or halted by states as part of litigation challenging the legality of those waivers that include work requirements (Arkansas, Kentucky, Indiana, and New Hampshire).

A core purpose of Medicaid is supporting people when they need help, which is why Medicaid has continual open enrollment and retroactive eligibility to cover the cost of care when those who are eligible aren’t already enrolled before a crisis. States should restore full retroactive eligibility immediately to protect thousands of newly-unemployed workers from even greater health and economic suffering.