The Los Angeles Times reported Monday that a new study found that Medicaid expansion brought appreciable improvements in health to enrollees, but also that full expansion nationwide would have averted 15,600 deaths among the vulnerable Medicaid-eligible population.

This is in contrast to the view of opponents of Medicaid expansion who have said that lack of evidence that enrollment in Medicaid improves health and saves lives, and therefore they believed that expansion was a waste of money.

In the 22 mostly red states that refused expansion, the cause of the 15,600 deaths of their state’s residents was attributed to failure to expand.

“This highlights an ongoing cost to non-adoption that should be relevant to both state policymakers and their constituents,” the authors of the study said.

Fourteen states are still holding out, States such as Wyoming and South Dakota, the article states, have a warped sense of “freedom.” States such as Maine and Louisiana, who have had a change in governors from Republican to Democrat, have recently adopted expansion. 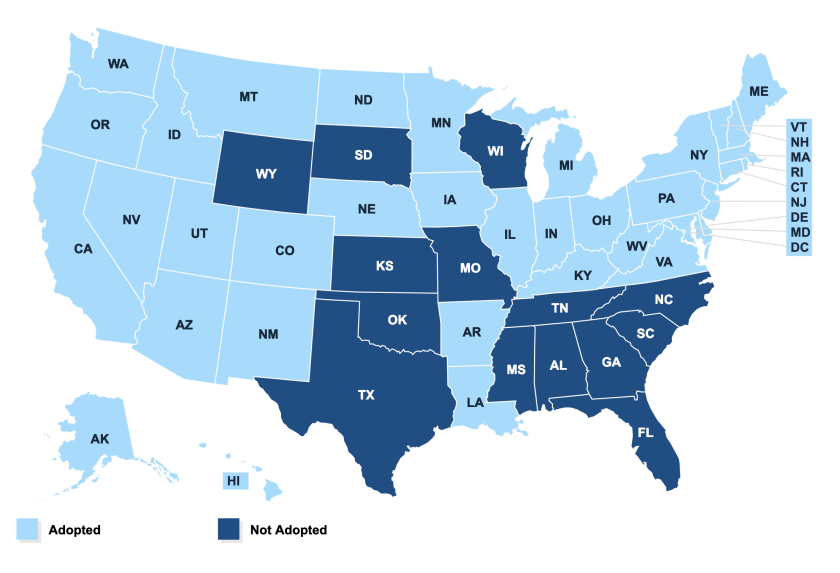 The article takes a dim view of the entire rationale for refusing to expand Medicaid, and cites a few noted Conservative voices against the entire idea of expansion and Medicaid itself.

Conservatives have worked hard to depict Medicaid as ineffective, the article reports. They’ve done so, it continues,  by overinterpreting limited studies such as a 2013 study of a Medicaid expansion in Oregon.

Critics focused on the researchers’ finding of “no significant improvements in measured physical health outcomes in the first 2 years” of expansion, but they overlooked the findings that the expansion did “increase use of healthcare services, raise rates of diabetes detection and management, lower rates of depression, and reduce financial strain.”

Conservative health policy Avik Roy has crowed, the article states, that the result “calls into question the $450 billion a year we spend on Medicaid, and the fact that Obamacare throws 11 million more Americans into this broken program.”

Another right-wing critic of Medicaid expansion, and not to mention, also of Medicare for All, and now more recently, the public option for Medicare, is CMS Administrator Seema Verma, a Trump flunky.

(Credit: Getty Images )  Picture worth a thousand words was never more true. What a piece of work!

Verma has argued that the expansion hasn’t been a success despite its enrollment figures and has been a leader in undermining the program by allowing states to impose premiums, work requirements and punitive disenrollments on patients. (Her efforts have been blocked by a federal judge, for now.)

This is why advocates for Medicare for All are so passionate and determined, in the face of even the slightest opposition to improving the health and lives of millions of Americans for small changes to our nation’s health care system.

Failure to expand Medicaid, failure to enact universal health care, even if it is a public option, is challenged from the right for morally indefensible and reprehensible reasons.

The cry of “freedom” from conservatives is a smoke-screen to hid their true purpose. To dismantle all social programs and funnel that money to the wealthy and corporations, as they have already done with the Trump tax giveaway.

Now they are trying to cut three million Americans off of food stamps.

All these schemes have one purpose in mind, to kill off their most ardent supporters in Southern and Midwestern states that continue to vote for these sociopaths. To them, freedom means, freedom for a company to profit off of your misfortune, whether that misfortune is due to poor diet, poor personal habits such as smoking and drug abuse, and poor health outcomes due to poverty and economic distress.

Naturally, any attempt to improve the health and lives of the poor, black or white, or Latino, etc., is viewed as “Socialism” and is deemed bad for the country, as Ms. Verma did this week to the Better Medicare Alliance’s Medicare Advantage Summit in Washington, D.C.

Wanting to cut of food stamps, fail to expand even Medicaid, tightening rules for who is eligible for these programs, is not only bad for the health of average Americans, it is bad for the economic vitality of the nation in an era of global competition.

The men and women at Trump rallies are angry, but they are angry at the wrong people. The clown on the stage is the person they really should be angry at, and his entire swamp of “the best people.”

This site uses Akismet to reduce spam. Learn how your comment data is processed.