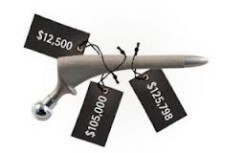 No doubt many of you have already seen the article in Sunday’s New York Times, “For Medical Tourists, Simple Math”, where the estimate for a new hip is over $78,000 in the US, but only $13,660 in Belgium. The article, the third in a series the Times is calling “Paying Till It Hurts”, explores how some Americans are going overseas to get hip surgeries with artificial hips made in the US, but that are too expensive to implant here.

The series is entitled “The $2.7 Trillion Medical Bill”. The first article in the series dealt with Colonoscopies and explains why the US is leading the world in health care expenditures. Wouldn’t you know it, that a procedure that gives you the shaft is the reason why the nation is getting an economic Colonoscopy?

The second article in the series is about the high cost of giving birth in this country, which might explain why the Duggar family has 19 kids and counting…they’re millionaires.

In yesterday’s article, a 67 year old man, Michael Shopenn, describes how he got an artificial hip made by a company called Zimmer Holdings in Warsaw, Indiana, but had to go to Europe to have it installed. A friend contacted friends at a medical device manufacturer, who arranged for his local hospital to get an implant at a list price of $13,000 with no markup, but the hospital told him that he would have to pay an additional $65,000 for the hospital charges, not including the surgeon’s fee. That is when he decided to look outside the US.

He was leery of Asian hospitals, despite the fact that the region is very popular with medical tourists (India and Thailand), so seven years ago, he went to a private hospital outside of Brussels to have his hip replaced for $13,660. This included the hip joint made in Warsaw, Ind., as well as the doctors’ fee, operating room charges, crutches, medicine, a hospital room for five days, a week in rehab, and a roundtrip ticket from the US.

Mr. Shopenn was quoted in the article as saying, “We have the most expensive health care in the world, but it doesn’t necessarily mean it’s the best.”

The rest of the article goes on to explain why Mr. Shopenn’s implant  costs so much in the US, and why the medical device industry and orthopedists have contributed to that high cost.

But the real question is why we continue to insist on allowing these businesses and medical providers to profit from such procedures as hip replacement surgery or knee replacement surgery, when we can have patients go abroad, not just to Europe or Asia, but to Latin America and the Caribbean, where the cost of such surgeries are much less expensive and the implants that are made here, are the same ones used over there, but at a fraction of the cost?

Is there something different between the Zimmer hip installed here by an American orthopedic surgeon or the same Zimmer hip installed by an orthopedic surgeon in a medical tourism destination facility? One has to wonder, not only why individual Americans would pay through the nose for hip surgery, but why workers’ compensation carriers and employers would do the same. Can you really negotiate the surgery down to the Belgian or other medical tourism destination price? Will a state’s Fee Schedule really save you all that money so that the surgery does not come out to over $100,000 when the total bill is added up?

The answer to those questions is no, and the Times article proves that, so why is the workers’ compensation industry unwilling to explore a less expensive, better quality and outcome alternative to expensive hip or knee replacement surgery? Probably because they lack the vision or will to do something different, and you know what Einstein said about that, or probably because they are xenophobic and don’t believe that foreign medical providers can do a competent job. Just ask Michael Shopenn if he’s satisfied with his surgery. I bet the answer is yes.

Is there something different between a 60 year old man who did not injure his hip on the job and a worker who is 40 years old and injured his hip on the job? Different hip implants? Different procedures? No, just the fact that one chose not to pay an exorbitant price for a hip and the other person’s insurance company or employer did not consider an alternative.

Never said it would be easy to implement medical tourism into workers’ compensation, and not saying it is without risk or complications, but can you really afford not to avail yourself of the alternative?  Can you really keep doing the same thing over and over again and expecting different results? It’s your choice…pay a big bill here at home, or pay a smaller bill by sending an injured employee overseas.

5 thoughts on “If it is Tuesday, It Must Be Belgium, or an Inexpensive Hip Surgery”

This site uses Akismet to reduce spam. Learn how your comment data is processed.